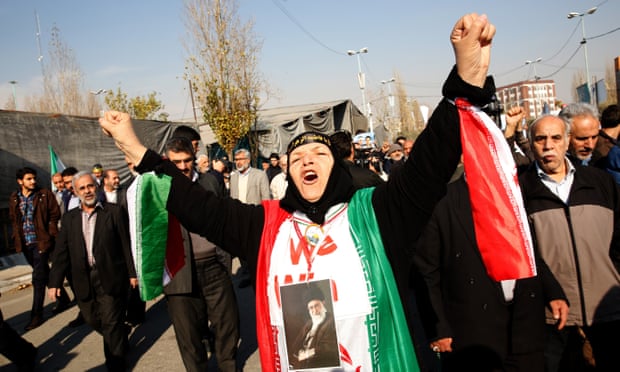 This article titled “Hard-won UN debate sees US at odds with partners over Iran” was written by Patrick Wintour Diplomatic editor, for theguardian.com on Saturday 6th January 2018 00.31 UTC

The US successfully fought off a Russian-led attempt on Friday to block a UN security council discussion over the past week’s Iranian protests. But it immediately found itself at odds with its European partners, who used the subsequent debate to reject American efforts to make the protests an excuse for ditching the 2015 nuclear deal with Iran.

Russia had tried to stop the UN discussion on the grounds that it would represent an inappropriate interference in Iran’s internal affairs. But the US countered by finding the required votes on the 15-strong security council to press for a debate.

Russia claimed the US intended to use what it regarded as largely economic protests directed against austerity inside Iran as a means both to challenge the Iranian government’s authority and to undermine the Iranian nuclear deal signed in 2015.

In an often bitter discussion laying bare the deep ideological rifts over the future of the Middle East, Iran’s UN ambassador Gholamali Khoshroo added he had “hard evidence” that recent protests in Iran were “very clearly directed from abroad”.

Khoshroo joined Russia in saying the US had abused its power as a permanent member of the security council by calling for a meeting to discuss the protests.

“It is unfortunate that despite the resistance on the part of some of its members, this council has allowed itself to be abused by the current US administration in holding a meeting on an issue that falls outside the scope of its mandate,” Khoshroo said. He accused the US of “preposterous bullying” and searching for every possible straw to keep itself afloat.

Iran’s foreign minister Javad Zarif later tweeted that the episode was another US foreign policy blunder, saying the majority of the security council had “emphasised the need to fully implement the Iran nuclear deal signed in 2015 and to refrain from interfering in internal affairs of others”.

During the debate the US ambassador to the United Nations, Nikki Haley, warned the Iranian authorities that the world was watching as Tehran responded to anti-government protests. “The Iranian regime is now on notice: the world will be watching what you do,” she said.

“The Iranian people are rising up in over 79 locations throughout the country. It is a powerful exhibition of brave people who have become so fed up with their oppressive government that they are willing to risk their lives in protest.”

She said Iranians were telling their government to “stop the support for terrorism, stop giving billions of our money to killers and dictators, stop taking our wealth and spending it on foreign fighters and proxy wars”.

But the UN’s French representative distanced his country from the tone of the US strategy towards the protests. In an implicit rebuke to the US for calling the debate, François Delattre said: “However worrying the events of the last few days in Iran may be, they do not constitute per se a threat to international peace and security. We must be wary of any attempts to exploit this crisis for personal ends, which would have the diametrically opposed outcome to that which is wished.” The nuclear deal was a cornerstone for stability in the Middle East, he added.

The UK’s representative Matthew Rycoft said Britain remained fully committed to the JCPOA [the nuclear deal], describing it as one of the great diplomatic successes of recent memory. He added: “We encourage all member states to uphold all their commitments. A prosperous, stable Iran is beneficial to all.”

He urged Iran to allow peaceful protests and said too often the country’s legitimate security interests were pursued in ways that endangered others and undermined the Iranian economy.

Both cases pitted the free speech rights of anti-abortion protesters against public safety concerns raised by women’s healthcare providers regarding demonstrations outside clinics. There is a history of violent acts committed against abortion providers.

At issue before the Supreme Court was whether the ordinances violate free speech rights protected by the U.S. Constitution’s First Amendment.

The cases did not directly implicate abortion rights. In a major ruling on Monday, the struck down a Louisiana law placing restrictions on doctors that perform abortions.

Also on Thursday, the court directed a lower court to reconsider the legality of two Indiana abortion restrictions – one that would require women to undergo an ultrasound procedure at least 18 hours before terminating a pregnancy and another that would expand parental notification when a minor seeks an abortion. The lower court had struck down both measures.

Abortion remains a divisive issue in the United States. The Supreme Court in its landmark 1973 Roe v. Wade ruling legalized abortion nationwide, finding that women have a constitutional right to the procedure. In recent years, numerous Republican-governed states have sought to impose a series of restrictions on abortion.

(Law & Crime) — A federal judge appointed by President Donald Trump on Tuesday evening overturned the Trump Administration’s second and most restrictive asylum policy, all because the government failed to abide by the Administrative Procedure Act (APA), the judge reasoned.

In a 52-page opinion, U.S. District Judge Timothy Kelly of Washington, D.C. held that in enacting the rule, which required immigrants to seek asylum in any country they passed through before they could claim asylum in the U.S., the Trump administration “unlawfully dispensed” with mandatory procedural requirements allowing the public to weigh in on proposed rule changes.

Kelly, who was appointed to the court in 2017, rejected the Trump administration’s assertion that the asylum rule fell within exceptions to the APA permitting the government to disregard the notice-and-comment requirement if there’s “good cause” such commentary is unnecessary or if the rule involves a military or foreign affairs function.

“[The court] also holds that Defendants unlawfully promulgated the rule without complying with the APA’s notice-and-comment requirements, because neither the ‘good cause’ nor the ‘foreign affairs function’ exceptions are satisfied on the record here,” Kelly wrote. “Despite their potentially broad sweep, the D.C. Circuit has instructed that these exceptions must be ‘narrowly construed’ and ‘reluctantly countenanced.’ The Circuit has also emphasized that the broader a rule’s reach, ‘the greater the necessity for public comment.’ With these baseline principles in mind, the Court considers whether either the good cause or foreign affairs function exception applies here. Neither does.”

According to Kelly, the Immigration and Nationality Act (INA) generally allows any person physically in the U.S. seeking refuge to apply for asylum — with some exceptions for immigrants who have committed certain crimes or who had previously been “firmly resettled” prior to arriving in the U.S.

“The Court reiterates that there are many circumstances in which courts appropriately defer to the national security judgments of the Executive. But determining the scope of an APA exception is not one of them,” Kelly wrote. “As noted above, if engaging in notice-and-comment rulemaking before implementing the rule would have harmed ongoing international negotiations, Defendants could have argued that these effects gave them good cause to forgo these procedures. And they could have provided an adequate factual record to support those predictive judgments to which the Court could defer. But they did not do so.”

Claudia Cubas, the Litigation Director at CAIR Coalition, one of the plaintiffs in the lawsuit, praised the decision as removing an “unjust barrier to protection” for those in need.

“By striking down this rule, Judge Kelly reaffirmed two fundamental principles. The protection of asylum seekers fleeing for safety is intertwined with our national values and that the United States is a country where the rule of law cannot be tossed aside for political whims,” Cubas said.

Read the full opinion below:

Read the US Supreme Court ruling here or below.